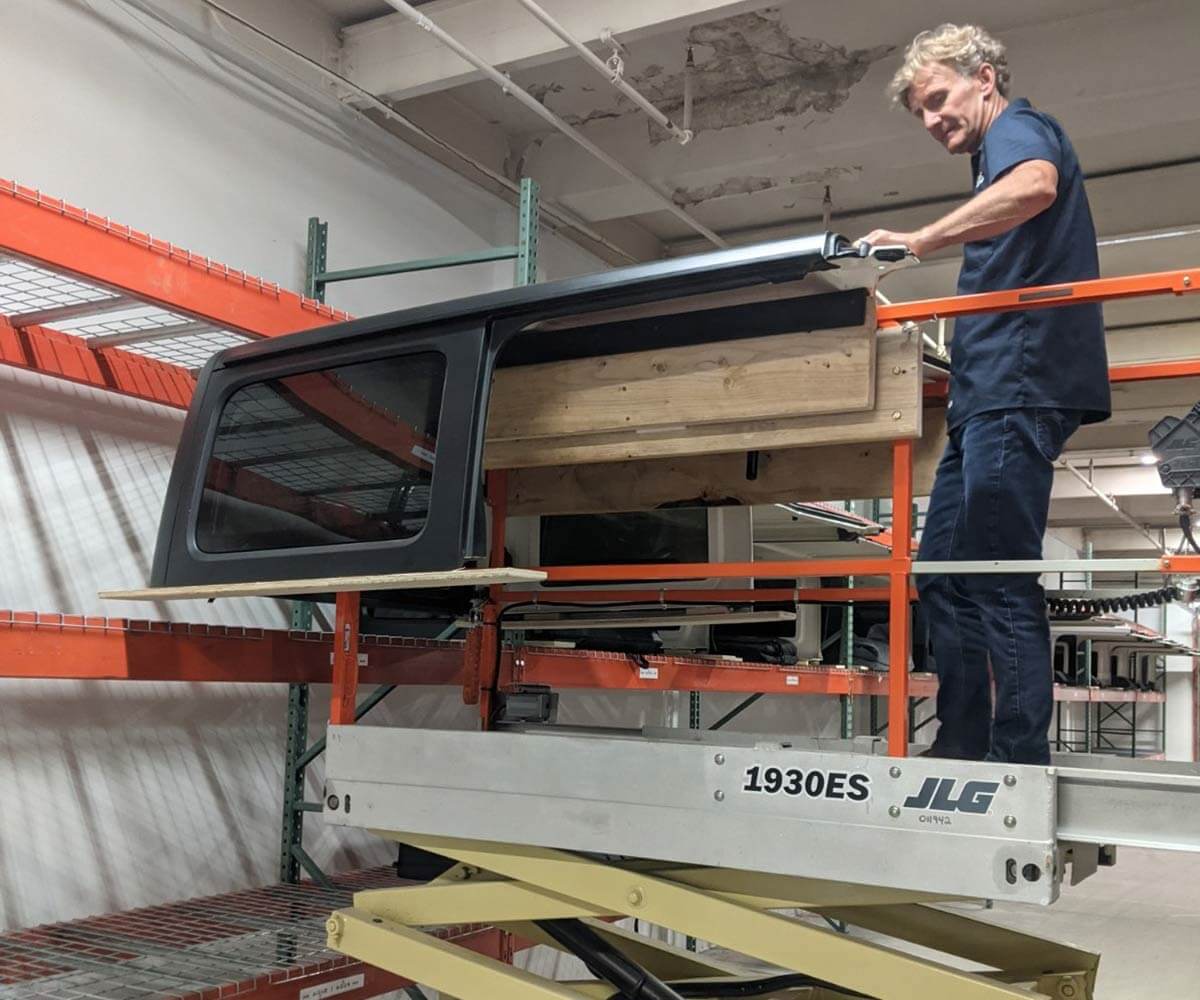 Joiiio was born from the minds of Jeep owners. It is their desire to allow Jeep owners the “unrestricted joy” of Jeep ownership. This meant creating a way to conveniently remove and store hardtops so your Jeep can be “liberated” during Minnesota summer months.

When it came to the layout and design of the facility and how to best use this space for storing tops, Joiiio turned to me, Eric Thovson at SJF Material Handling for expertise in the design of the space.

Ken Zylstra from Joiiio first began working with SJF Material Handling in October of 2021 when the plans for Joiiio began to take shape. A “test rack” was purchased in October to confirm design plans.

When Joiiio secured a warehouse space in February, the building layout was reviewed and the space was designed to hold the maximum quantity of Jeep hardtops. SJF was able to supply used racking materials, a key cost savings component for a start-up company like Joiiio.

Remodeling of the warehouse began. Once completed, we met at the facility prior to installation to go over plans and confirm elevations of beams levels. 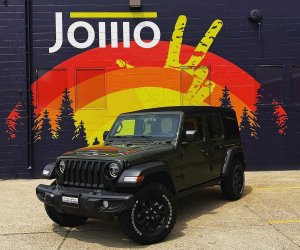 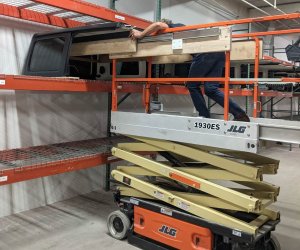 Drawer slides allow for precise placement of tops into the rack. 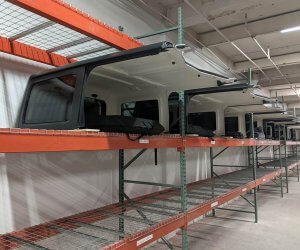 Inside Joiiio Warehouse - Hardtops are stored in pallet rack up to 4 levels high.

If you are a Jeep enthusiast looking for hardtop storage, be sure to contact Joiiio at hello@joiiio.com or call/text them at (612) 712-JEEP.

If you need help with any racking or warehouse solution, contact Eric Thovson at SJF Material Handling at ethovson@sjf.com or directly at (320) 485-4967. 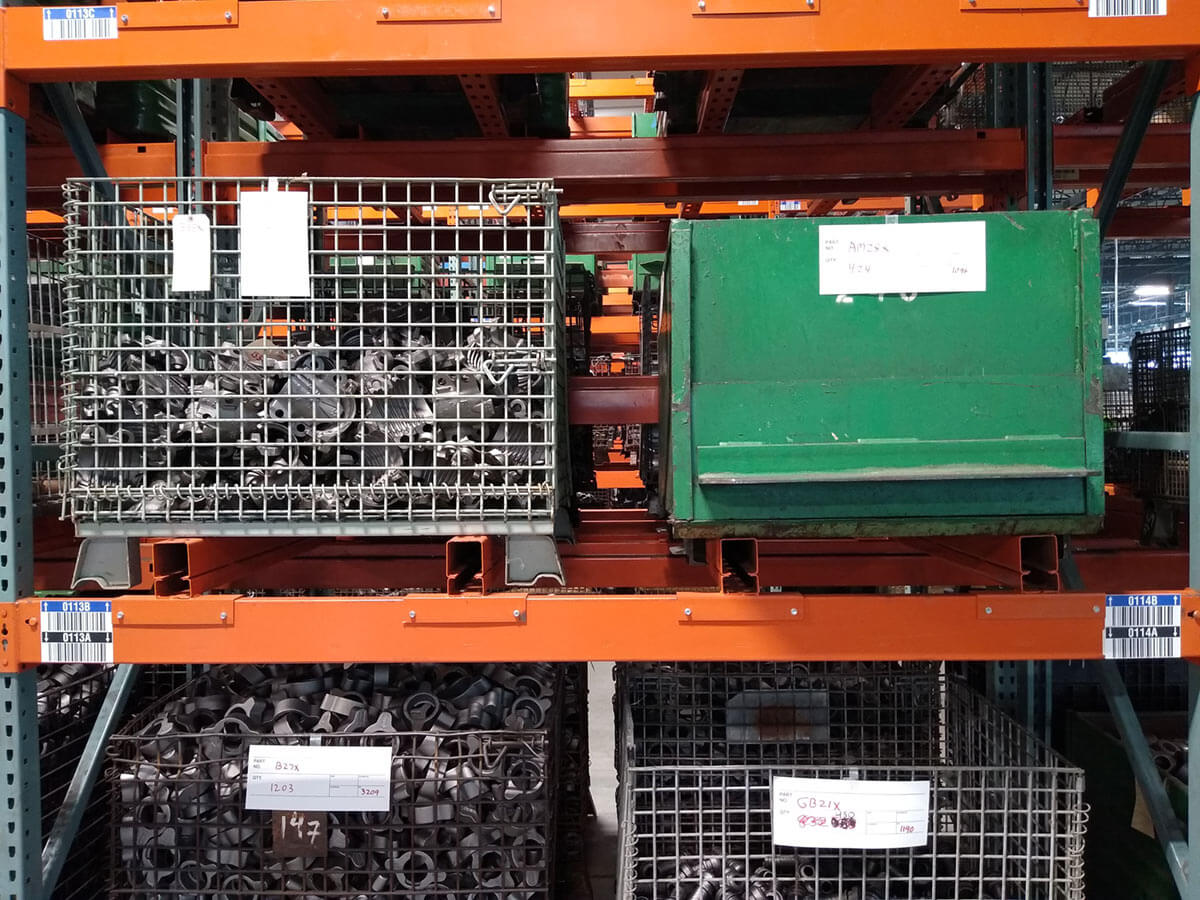 Forklift entry bars are used to keep product supported off the pallet racking itself. They allow the picker to get underneath a pallet, tote or product stored with lift equipment safely and clear of racking obstacles.

An Example of when fork entry bars are useful

A customer is storing metal totes/bins full of couplings. The tote/bin has feet/legs on it and you will be unable to store tote/bin effectively on pallet racking without point loading (not the proper way to utilize pallet racking).

The Fork Entry bar will allow the tote to be stored on the bottom base of the tote/bin rather than the feet/legs of the tote. This offers an evenly distributed load on the fork entry bars that are connected properly to the load beams to ensure all weight is being distributed on the load beams.

Questions about forklift entry bars and their uses

Q: Can I secure the Fork Entry bars to the pallet rack?

A: Yes, we fabricate a tek screw hole for end users to fasten the fork entry bar to the load beam to secure placement.

Q: Can I get different heights? What if I need the fork entry bar to support my product higher than normal?

Q: What if I have an uncommon depth of racking or use box beams?

A: Not a problem, we can custom fabricate the fork entry bars to fit your exact needs.

On Friday, May 27th, SJF had it’s first potluck of the year. As much as we enjoyed the beautiful weather and great food, it was a bittersweet day because it was the last day at SJF for Tom Moore, our friend and co-worker in Sales for over 8 years. Tom and his wife Lori are moving out of the area, ready to start a new journey. We’re all very happy for the Moore family and the adventures that await them, but we will miss Tom and his creative quips that seemed to come out of nowhere.

We also had a special visitor that joined us for the potluck – Mrs. Veronica Sterner, wife of the late Jerry Sterner. Mr. and Mrs. Sterner were the people that started this company over 43 years ago. Without them, there would be no SJF Material Handling.

Here are a few photos of our celebration. 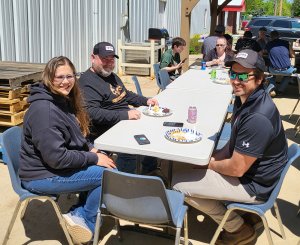 Tom Moore, center, along with Janae, left, and Sam, right. 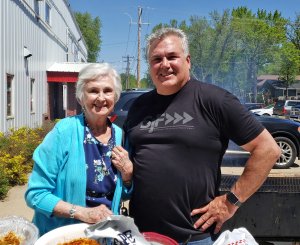 Our special guest, Veronica with son and COO Frank Sterner. 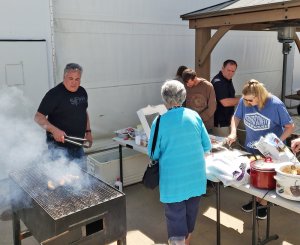 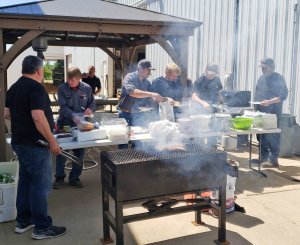 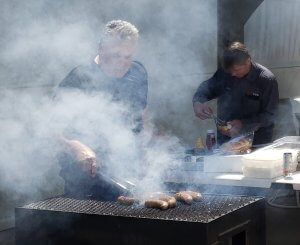 We seem to have lost Frank and Brian in the smoke! 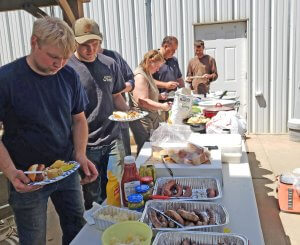 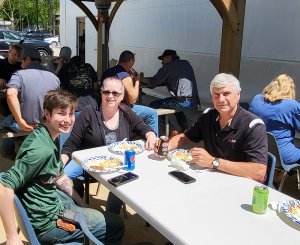 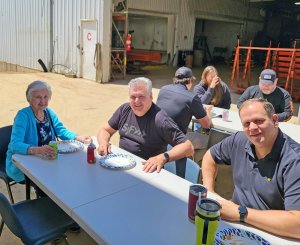 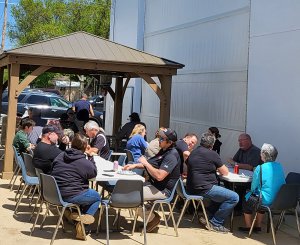 Enjoying the weather and the company

SJF’s Solution’s Specialists are available for professional advice and maybe even a joke or two. Give them a call for the best deal on all your material handling needs! Call 320-485-4974, email support@sjf.com or visit https://www.sjf.com. 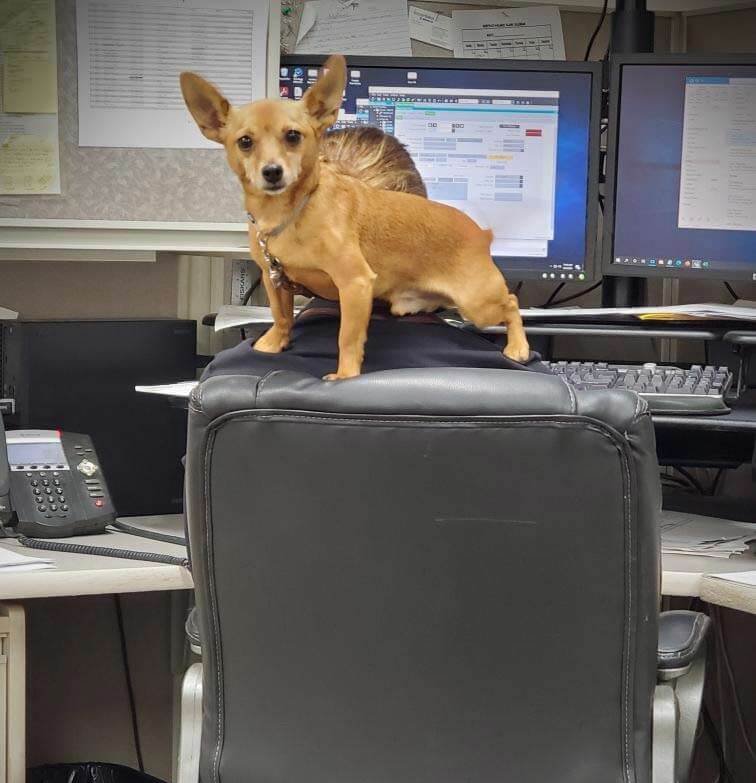 Accounting assistant? Security guard? You decide. But we all agree that Pedro is all business at SJF!

Pedro, our visiting chihuahua, is often seen with his sister Beatrice. Both Pedro and Beatrice are part of the Bachel household and are owned by Lori Bachel in Accounting and her family.

I’ve said it before and I will say it again, we love that SJF is a pet friendly place to work! #petfriendly #loveourfurbabies

This last year was a rough one for all of us. Everything was different and we all were left on our own to figure out how to entertain ourselves and our family members safely.

Justin Erkenbrack, SJF Solutions Specialist, had a pretty great weekend of safe entertainment this winter with his fiancé, kids and the wide open ice of a Minnesota lake. Not only did they have a great time, he caught himself a monster!

In Minnesota, we take our fishing seriously. Many people spend half of their life in search of “the big one” (literally, and this is no joke to the serious fishermen!), so to catch this one was a rare moment!

Justin’s 16″ crappie is easily considered “trophy sized” by any fishing expert’s standards (and believe us, there are a lot of self-proclaimed fishing experts around this area). I know this because I fact-checked the info by Googling “What is considered a trophy sized crappie“.

The definition from this highly scientific source, otherwise known as Google, was as follows:

That depends on several things – the body of water you’re fishing, the state in which you fish, how big a crappie you’ve caught before. Speaking in generalities, however, any crappie over 1 1/2 pounds is an exceptional fish, and for most anglers in most waters, a crappie over 2 pounds would be the trophy of a lifetime.

This beast weighed in around 3 lbs. and was caught using a minnow head and a jig given to him by none other than, and I quote from Justin himself, “The legendary fish slayer” and another of SJF’s Solutions Specialists, Tom Moore.

Being true Minnesotans, we were all excited for him and feel he has secured bragging rights for a good long time for this one! Maybe it will give us all something to shoot for next time we take to the lake, whether it be frozen or not. 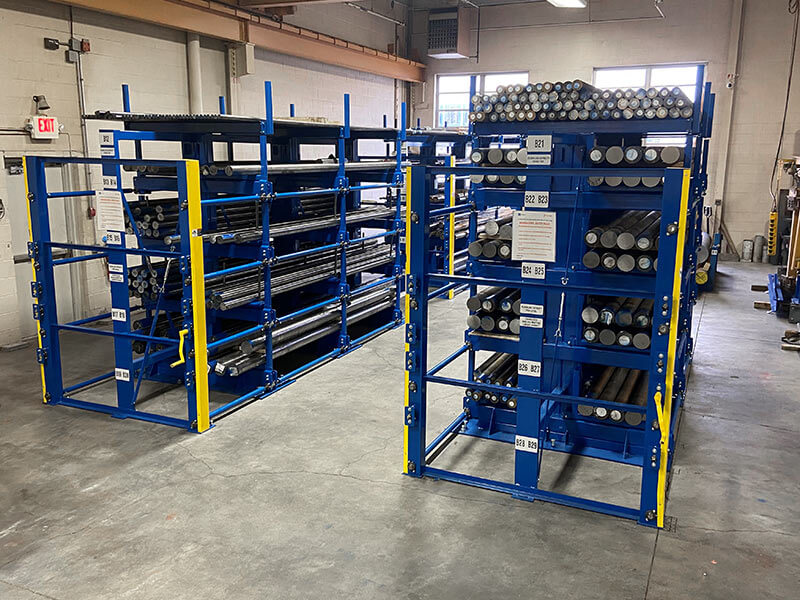 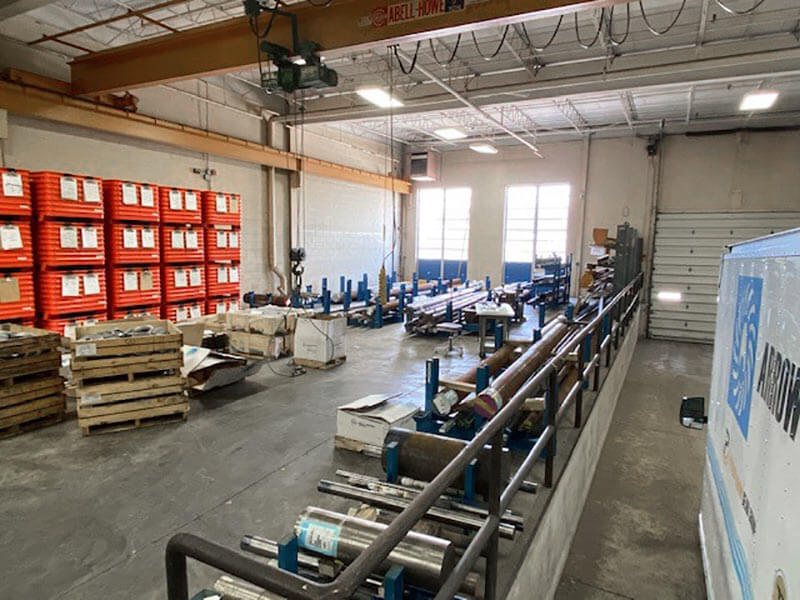 On this project, SJF’s Solutions Specialist Jason Deiter worked closely with customer Arrow Gear and Rack Engineering to provide a crank-out solution that would free up floor space, utilize vertical space with the ability to retrieve from individual compartments, and organize inventory.

Units have four crank out levels with 5,600 lb. capacity per arm, plus a 20,000 lb. capacity fixed top for additional storage. Compartments are 14″ in height and use 24″ length arms.

For more information on crank out cantilever racking, contact Jason Deiter at SJF at (320) 485-4961 or email him at jdeiter@sjf.com. He’ll be able to answer any questions you may have and help plan for your needs! 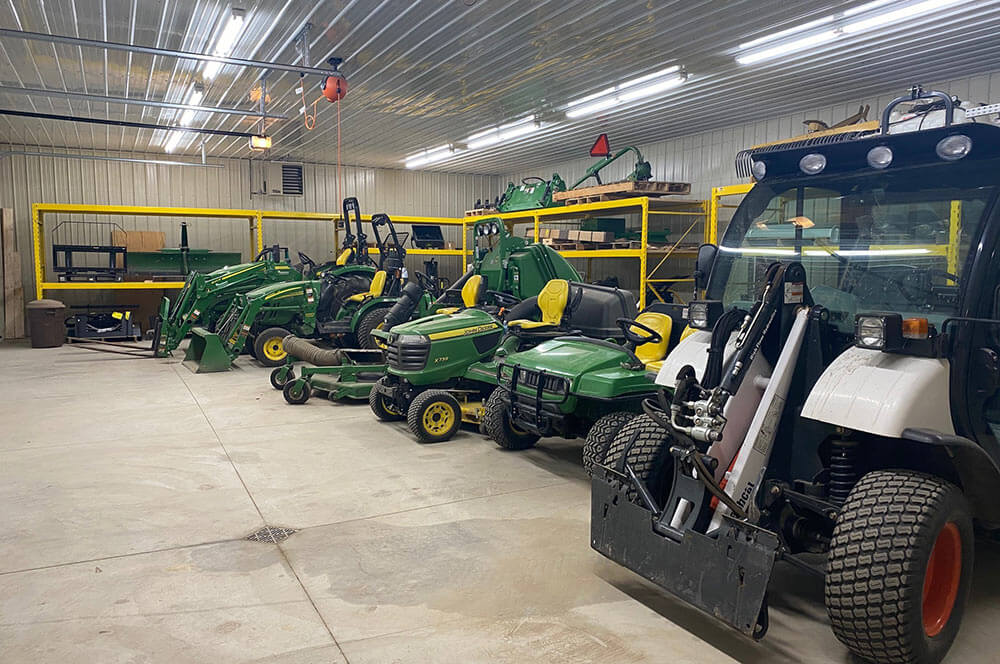 A recent SJF customer from Michigan was very happy with both the racking and the slick look of his storage area for his John Deere implements and attachments. SJF Solutions Specialist Kendal Kalamaha listened to his needs and found the perfect solution.

We’re happy to accommodate your needs for storage racking. We offer a wide variety of sizes, configurations, and colors. If you’d like to match it to your implements, we’re ready to customize!

If you need ideas or know exactly what you want, Kendal can be reached directly at (320) 485-4966 or kkalamaha@sjf.com. He has many years of experience and has great ideas!